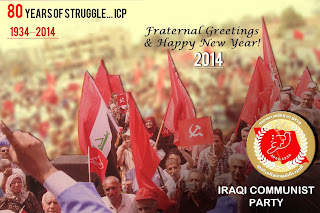 The Iraqi Communist Party announced on 9 December that it will be contesting the forthcoming parliamentary elections in April 2014 within the Civil Democratic Alliance. It pointed out that some political blocs have failed with their sectarian plans and are now attempting to take part in the elections under  the guise of a “civil democratic” program.

Jassim al-Hilfi, member of the party’s Political Bureau, said in a statement published by “Tareeq Al-Shaab” (People’s Path), Iraqi CP’s daily newspaper, that the party “remains part of the Democratic Current which took part In the provincial elections earlier this year and won 11 seats.” He confirmed that the “Communist Party will contest the parliamentary elections in April 2014 as part of the Civil Democratic Alliance, against blocs whose sectarian plans have failed are trying once again to take part in the elections under a civil democratic cover, but the essence of their thought is sectarian.”
He said that the Civil Democratic Alliance include the forces of the Democratic Current (such as the Communist Party, National Democratic Part, Arab Socialist Movement, Democratic Action Party, Umma Party) as well as the People’s Party, several other forces and independent figures. “These democratic politicians have not been tarnished by corruption and shedding the blood of Iraqis, and are known for their integrity, competence and support for the ci,vil democratic alternative.
Raid Fahmi, member of the Political Bureau of the Iraqi Communist Party, told “Shafaq News” agency that the Civil Democratic Alliance is expected to do well in provinces in southern Iraq, including Basrah, Thi Qar and Muthanna, as well as Baghdad, as it did in the provincial elections.
The Communist Party had launched its 80th anniversary celebrations last October in the city of Nasseriyah (in southern Iraq) which had witnessed its beginnings. The party was founded on 31 March 1934. The program of the 80th anniversary celebrations includes many political and cultural events in Baghdad and all over Iraq that will continue well into 2014.
Posted by Salam at 05:14 No comments: