Iraqi CP meeting with the CP of Bohemia and Moravia

Iraqi CP meeting with the CP of Bohemia and Moravia

Comrade Mufid al-Jazairy, member of the Central Committee of the Iraqi Communist Party, held a meeting with comrade Vojtech Filip, the leader of the Communist Party of Bohemia and Moravia on Thursday 15 August 2013 in Prague.
They exchanged information about the situation in their respective countries, the tasks facing the two fraternal parties and issues of joint cooperation and coordination.
Posted by Salam at 13:31 No comments:

to the Communist Party of Mexico

7th August 2013
To: The Political Bureau of the Communist Party of Mexico
Dear Comrades, 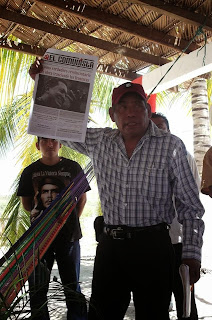 We strongly condemn the barbaric crime of the brutal torture and murder of comrade Raymundo Velázquez Flores, Secretary General of the Regional Committee of your fraternal party in the state of Guerrero, along with comrades Samuel Vargas Ramirez and Miguel, who were leaders of the Revolutionary League of Peasants of the South.
This cowardly act is a desperate attempt by the enemies of the Mexican people and working class to physically eliminate outstanding party cadres who have dedicated their lives to the cause of freedom, democracy, social justice and socialism. We are confident that this heinous crime will only strengthen the resolve of Mexican Communists and their determination to continue the struggle waged by the martyred comrades.
Please convey our wholehearted condolences to the families and comrades of the three martyrs. On this sad occasion, we reaffirm our solidarity with your fraternal party and the just struggle of the Mexican people and working class.