On the final day of the election campaign: 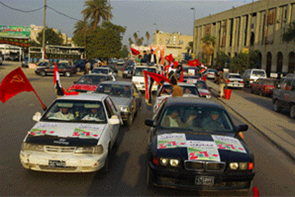 More than 30 cars took part, distributing leaflets and calling on people to vote for the democratic coalition list "Madaniyoun" (No, 460). The distributed material included the appeal issued yesterday by the Iraqi Communist Party leader, Hamid Majeed Mousa, calling on all Iraqis to participate actively in the provincial elections on Saturday 31 January 2009.

Members of the party Central Committee, Jassim Al-Hilfi and Ali abdul-Nabi Jassim joined the motorcade along with the secretary of the party district committee in Al-Thawra City. 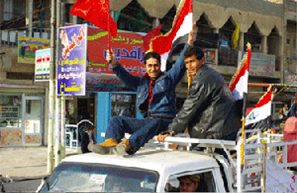 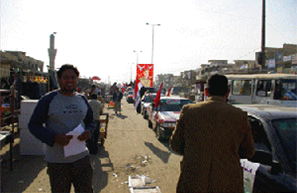 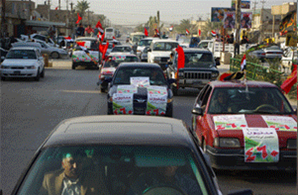 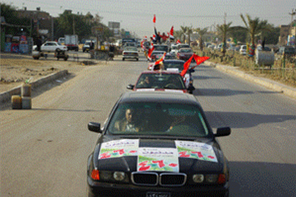 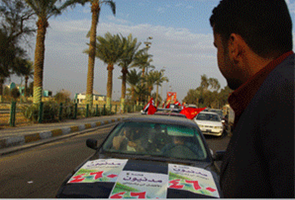 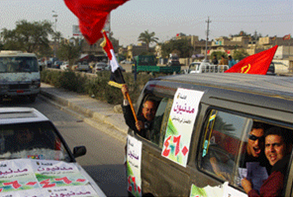 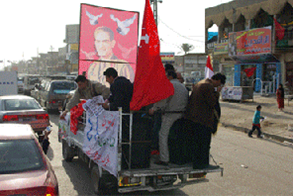 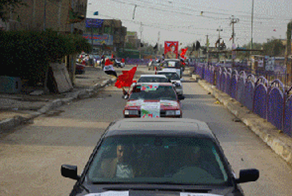 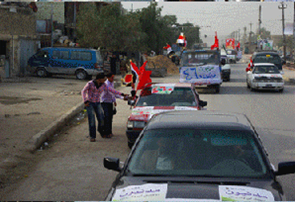 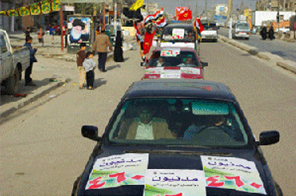 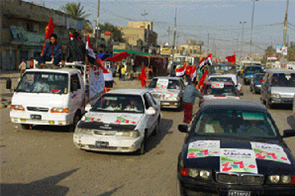 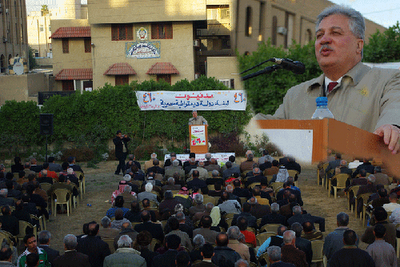 A joyful ceremony culminating the election campaign of the Iraqi Communist Party took place yesterday afternoon, 28 January 2009, in the courtyard of the party headquarters at Andulus Square in central Baghdad. It was attended by hundreds of party members and supporters, including several members of the party leadership.

Comrade Hamid Majeed Mousa, the secretary of the party Central Committee, addressed the gathering. He said that the provincial elections day, 31January 2009, "will be a memorable day in the history of Iraq and in your lives, having experienced the previous elections with all its difficulties, failures and shortcomings."

Referring to the forthcoming elections, he said: "We hope that this experience will be different. It is an opportunity for the masses of our people to freely express their hopes and ambitions and to elect those deemed eligible for expressing these hopes and aspirations and defending them."

"We have presented to the people an alliance of Communists, democrats, honest nationalists and genuine independent figures. This alliance, which has taken the name of Madaniyoun in Baghdad and other names depending on the circumstances of each province, is a bouquet of roses, that promote hope, love and tolerance in the hearts of the people, and promise them, in word and deed, a better life."

Mousa stressed that the provincial governments, despite the ongoing controversy about the powers of the centre, the provinces and regions, will have a bigger role in the life of each province, and in the participation in decision-making at all levels.

The program of the event included the recital of popular poetry by the well-known poets Nadhim Al-Samawi ,Hamza Al-Hilfi and Irian Sayyid Khalaf. 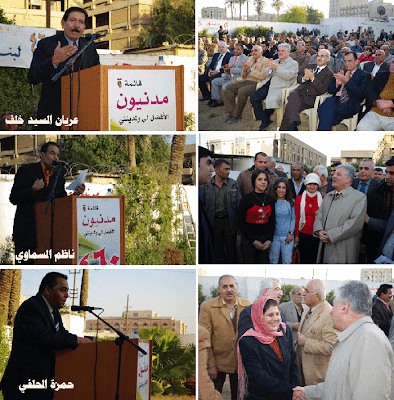 Iraqi CP leader at meeting in Baghdad with intellectuals


At a meeting in Baghdad with hundreds of intellectuals
Iraqi CP leader: Communists are proud of their close ties with culture
Hundreds of Iraqi intellectuals, including writers, artists and academics attended a meeting organized by the Iraqi Communist Party in Baghdad on 27 January 2009.

Hamid Majeed Mousa, Secretary of the party's Central Committee, was present in the packed hall of Al-Sadeer hotel in Baghdad, along with Mufid Jazairy and Hassan Akif, members of the Political Bureau.

In his opening speech, Jazairi pointed out that the event was part of a series of meetings convened by the party with intellectuals, academics and media people with the aim of maintaining dialogue and discussion about issues relating to situation in the country and

developments, and also about culture. He referred to the historical relationship that has connected the Iraqi Communist Party to culture and intellectuals.

Hamid Majeed Mousa called on Iraqi intellectuals to contribute actively in shaping the future of the country and play the required enlightenment role in society, so as to contribute to strengthening the democratic process. He added that intellectuals are engaged in an important struggle within the framework of striving to chart the way forward, towards the future.

Mousa reviewed the political situation in the country, pointing out the risks to the democratic process, as well as positive developments in the country. He said that the Iraqi Communists are proud of the party's close relationship with culture and intellectuals, recalling the role played by the party, and is still playing, in this regard.

The meeting discussed the political situation and developments in the electoral process and its campaigns, and the importance of provincial councils in shaping the future of the Iraqi state, as well as providing services and working with the Iraqi citizens.

Iraqi CP leader at election rally in Nasiriyyah:
We will stand firmly against Trinity of Backwardness;
disease, poverty and illiteracy
The leader of the Iraqi Communist Party, Hamid Majeed Mousa, addressed a big election rally held in the city of Nasiriyyah, in Thi Qar province in southern Iraq, on Friday 22 January 2009, in support of the party electoral list (No. 307) which is contesting the forthcoming provincial elections. The delegation included Jassim al-Hilfi, member of the party's Central Committee.

The rally, held in the sports hall of Naseriyyah, was attended by party members and supporters from the city as well as districts such as Qal'ah, Nasser, Rifa'i and Shatrah.

In his speech, Mousa expressed his wishes that the party electoral list would be able to fulfil the aspirations of the population of the province. He said: "The land on which we are standing is endowed with enormous wealth, but the oppressive regimes that came to rule Iraq only offered Iraqis injustice, murder and starvation. Taking a genuine stance towards the causes of the

people and responding to their needs require an honest and courageous stance against the trinity of backwardness: poverty, disease and illiteracy. This does not come easily, but through combating corruption and undermining the positions of corrupt elements, in all state institutions and organs.

Mousa stressed the importance of participation in the provincial elections as a big patriotic obligation, especially that the struggle is continuing over defining the features of the new political system for Iraq. He summarized the plan put forward by Iraqi Communists as aiming to establish a pluralist and unified democratic and federal Iraq, that is independent, free and prosperous, in which human dignity and rights are respected. This project emphasizes the principles of citizenship, "away from sectarianism and division, and away from the whims of chauvinism, nationalist intolerance and hatred," he said.

"Without promoting tolerance and coexistence among all Iraqis, irrespective of their ideological orientation, ethnic and religious affiliations, one cannot conceive that Iraq would become peaceful and embark upon building and reconstruction. He pointed out that the provincial councils will have an important role in the expressing the will of the people. He stressed, furthermore, the need to reach out and get in touch with the silent forces; those who have been ignored, and to make them aware of the significance of the Iraqi C

The secretary of the party provincial committee and member of the party's Central Committee, Rahi Muhajir, had earlier welcomed comrade Mousa and other guests. He referred to the significance of the visit and its timing, expressing the party appreciation and respect for the province, its people and activists, and also offering support for the party election campaign.

Iraqi CP criticizes turning provincial elections
into battles of political sloganeering
Mufid al-Jazairy, member of the Political Bureau of the Central Committee of Iraqi Communist Party, has criticized turning the provincial elections, that will take place on 31 January 2009, into battles of political slogans or settling accounts that have nothing to do with the interests of the people.

In a statement given to "Tareeq Al-Shaab", the central organ of the party, he stressed the need to focus on the issues of services and providing job opportunities for the unemployed.

Al-Jazairy warned against not taking legal action against those are found guilty of financial corruption, among officials and others. He explained that both phenomena, the abuse of power and the continued financial and administrative corruption, are among the key reasons that make the Iraqi voter unenthusiastic to go to the ballot box in the provincial elections.

He added that Iraqi citizens are still demanding the implementation of promises and the provision of all prerequisites for a prosperous life, including plans for housing, tackling unemployment and rebuilding the infrastructure that have been obstructed due to widespread corruption in government departments. He called for swift and effective action to regulate the spending of funds allocated to the provincial councils. "There are quarters that seek to transform the forthcoming election process into a battle of political slogans and the exploit some circumstances to serve their interest, while turning a blind eye to the poor performance of those responsible for the the misappropriation of funds earmarked for national programs and tackling unemployment," he said.


The Iraqi Communist Party Mobile Clinic is continuing a non-stop tour to provide free medical advice and help to poor people. Below are photographs from its recent visit to the area of Sab' al-Boar, 35 km from the capital Baghdad.

IRAQI COMMUNIST PARTY
Statement about the Continuing Criminal Israeli Aggression on Gaza
The Political Bureau of the Iraqi Communist Party has issued the following statement on 8th January 2009:

Israel is continuing, for the 13th day in a row, its criminal aggression on the Gaza Strip despite the worldwide campaigns of condemnation and denunciation, and the mounting and escalating demands for a halt to the destructive military operations. And Israel has persisted in violating the most basic humanitarian values, norms and principles by committing a heinous crime that has shocked the conscience of the world when it bombed three schools and other civilian targets, killing dozens of children, women and the elderly.

Despite the increasing number of victims of the aggression to more than 600 martyrs and 3000 wounded, and the deterioration of services to dangerous levels that threaten with a humanitarian catastrophe, as a result of the scarcity of food and medical supplies that Isreal allows to reach Gaza, as well as the huge devastation inflicted on Gaza City and its basic infrastructure, the UN Security Council failed for the second time in reaching a resolution that would force Israel to accept an immediate ceasefire because of the position of some states, led by the United States, that is biased unreservedly towards Israel.

While reiterating our strong condemnation of this blatant aggression and our solidarity with the Palestinian people and the population of Gaza Strip in their plight and steadfastness, we call for the doubling of political and diplomatic efforts to reach an immediate ceasefire, lift the siege on Gaza and begin serious negotiations to achieve a peaceful and just solution that guarantees the legitimate national rights of the Palestinian people to establish their independent national state. We also call upon all the Palestinian factions to overcome their differences, put an end to the state of division and rebuild their unity in order to lead the Palestinian people's struggle towards achieving their just objectives.