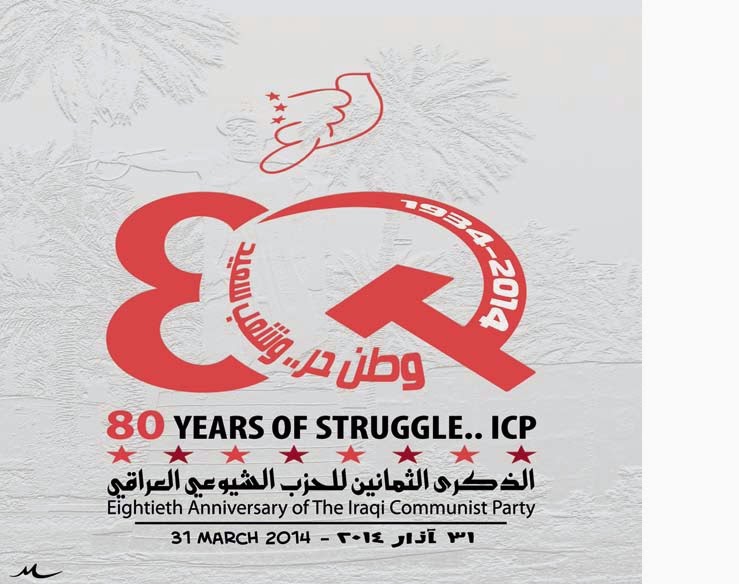 Iraqi CP Statement on the 80th Anniversary of its Foundation


Statement of the Central Committee of the Iraqi Communist Party


on the 80th Anniversary of its Foundation

The political and social developments in Iraq, since the early decades of the twentieth century, along with the working class maturing and transforming from a class in itself to a class for itself, in addition to the positive impact of the October Socialist Revolution, and the spread of progressive ideas in large areas of the world, provided the conditions for the emergence of the Iraqi Communist Party. Thus the dream of the workers and peasants, and all Iraqi toilers, was fulfilled; that they have their own party that expresses their radical aspirations and goals, and that would lead their struggles to achieve a Free Homeland and a Prosperous People.

The party foundation was achieved at the initiative of a group of revolutionary pioneers, led by the party's founder Comrade Yusuf Salman Yusuf (alias Fahad), through the unification of scattered Marxist cells and circles in Nasiriyah, Basra and Baghdad. The party first appeared on 31 March 1934 under the name of the "Committee for Combating Colonialism and Exploitation", and a year later turned into the Iraqi Communist Party.

The announcement of the foundation of the party, and its immediate involvement in the struggle in defense of the interests of the poor and disadvantaged, had echoes and repercussions that resembled a quake in a stagnant political life that had been the monopoly of some traditional parties in Iraq. The reactionary monarchic regime at the time therefore dealt with the newborn party with utmost ruthlessness. This became a consistent policy of all the successive rightist and dictatorial regimes that ruled Iraq, especially in the periods of Baath Party rule in 1963 and after 1968, because they were well aware that the Communist party constituted a real threat to their class and political interests.

Since its early days the Iraqi Communist Party’s main preoccupation was to achieve full independence and national sovereignty, distribute land to the peasants, ensure workers' rights and their trade unionist freedoms, secure democratic freedoms for the popular masses and their patriotic parties, and to support the Arab peoples, especially the Palestinian people, and all the peoples of the world in their struggle for liberation and democracy and for getting rid of imperialist domination. At the same time, the party fought consistently against the chauvinist and discriminatory policies of successive dictatorial regimes, and for the right of the Kurdish people and other nationalities to enjoy their legitimate rights within a unified federal democratic Iraq.

The party took a distinct position towards women and their rights, and stressed the need for women’s equality with men. It also paid great attention to culture and intellectuals, and strived to provide a favorable atmosphere to enable them to reveal their potential and to take care of their creative works, in conjunction and harmony with the party’s struggle to liberate the poor and low-income people from the clutches of the backward social reality and exploitative relations of production. For this purpose, the party always sought to establish the broadest social and democratic mass movement, leading political and economic struggles, and providing effective leadership to popular uprisings which broke out against tyranny and oppression, and against the suppression of the people's right to express their opinion and enjoy freedom along with other free peoples of the world.

The party also adopted a memorable stance towards religion and religious people, embodied in full respect to both. It called for tolerance and peaceful coexistence among religions and sects, ensuring their rights to worship and practicing religious rituals in safety and freedom. It opposed involving them in political conflicts because this would constitute an abuse to religion itself, especially if it is accompanied by sectarian intolerance which would eventually lead to grave conflicts that may be difficult to control. This is, regrettably, what we are witnessing in the very dangerous current situation.

This year we are celebrating the 80th anniversary of our party while our dear country Iraq is going through a comprehensive crisis that has become more complicated recently as a result of the rulers’ insistence on adopting sectarian and ethnic power-sharing in all aspects of the political process and in society as a whole. This has been associated with the approaching parliamentary elections and the feeling by some that their chances of remaining in power have become limited as a result of their policies and performance.

Putting ahead narrow selfish interests, whether personal, sectarian or regional, disregarding the interests of the people and the homeland, accompanied by conflicts and exchanging malicious political accusations, pursuing policies of exclusion and marginalization against opponents, striving to concentrate power in the hands of one group, the continued attacks on democratic freedoms, silencing critics and violating the Constitution, as well as maintaining the laws of the former dictator Saddam as arbiter in a lot of things .. all of this has led, as we see today, to the horrific deterioration in security and on political, economic, social and cultural levels.

The continuation of this extremely disturbing situation, and continuing to pursue the current policy in dealing with problems and crises, and in the management of the affairs of the state and its various institutions, would lead to what is far more dangerous unless a qualitative shift takes place in the political thinking of the country’s rulers. This requires a total rejection the sectarian-ethnic power-sharing system, then sitting down to dialogue, expressing willingness to make reciprocal concessions, respect for the opinions of others, and the involvement of others in political decision-making, relinquishing unilateralism and tendencies of vanity and exaggeration of personal capacity. Our party has put forward its analysis of the current situation, and its concrete perceptions and proposals for meeting its challenges, and its risks to the security of the country, the unity of its national fabric national and the process of democratic transformation, in a memorandum that was addressed in late February 2014 to the three presidential bodies, the political blocs, and the leaders of political parties, holding them accountable and warning that history will not have mercy on those who contribute to the impoverishment of the people and the destruction of the country.

On this occasion, we renew our high confidence in the masses of our people and their ability to choose their true and genuine representatives in the forthcoming parliamentary elections. Those who had given false and misleading promises have been exposed. They have achieved nothing of significance for the people, not even for their own electorate, rather they did just the opposite, as they have filled their pockets with money, have embedded the ugliest forms of sectarianism, and have led Iraq into a tunnel where no light can be seen at its end.

Finally, we stress that the electoral list of the Civil Democratic Coalition is the lifeline for all Iraqis because it includes in its ranks all those who are fighting to save Iraq from the diseases of sectarianism and authoritarianism, from financial and administrative corruption, and from bribery and banditry, and to realize the aspiration of the people of eradicating terrorism and terrorists, and living in security, peace and social justice.

Long live the Iraqi Communist Party!
Victory to our people and their democratic forces in building a democratic civil and prosperous Iraq!
Glory to the martyrs of the party and the people!