29 January 2011
Statement of the Political bureau of the Iraqi Communist Party
In Solidarity with the Uprising of Masses of Egyptian People
Our peoples will not be subjugated from now on... They will not tolerate the stifling of their legitimate aspirations towards democracy!
The Egyptian masses, full of resentment and discontent in Cairo and other cities, have in the past hours continued defying the rule of tyranny, corruption, misery and "inheritance", in their heroic struggle for radical reforms in the political life to achieve freedoms, real constitutional democratic life and social justice which they had been denied for decades.
The means and methods used by the ruling regime, starting with the brutal repression that led to the death of dozens, injuring hundreds and arresting thousands at the hands of the vicious security forces, through cutting off domestic and international communications via mobile networks and internet, then declaring a curfew and deploying the army in the streets, and eventually retreating officially and announcing the dismissal of the government, were all unable to extinguish the torch of mass struggle for radical democratic change and to stop the overwhelming storm of protest that has swept the whole of Egypt involving millions of people led by the masses of young people. These methods have instead led to sharpening the resolve of the rebellious masses, and to raising stronger and clearer slogans against the regime and its ruling party, and against its leader, despite the attempts of some to blur the real objectives of the rebellious Egyptian masses.
These developments and the overall events which swept Egypt in recent days, as well as the heroic uprising of the Tunisian people, along with the angry popular movements in Yemen, Jordan and Sudan, have proved that the oppressive and despotic Arab regimes can no longer deceive the peoples and suppress their will and yearning for democracy, and a free and dignified life. It has become clear that these deprived peoples and their vibrant forces that are struggling for freedom, bread and happiness, can no longer acquiesce to the confiscation of their fundamental rights and the stifling of their legitimate aspirations under false slogans. They have realized from the lessons of their bitter experience the close interrelationship between the struggle for national causes and the issue of political and social democracy.
While declaring our solidarity with the masses of the Egyptian people and their patriotic and democratic forces, and calling for an end to all acts of repression by the regime against their legitimate struggle, we reaffirm our full and consistent support for the just demands of the masses of Egyptian democratic change, and for establishing a system of freedom, democracy and social justice.
Posted by Salam at 14:02 No comments:

Iraqi CP - Victory for the Uprising of the Tunisian People!

The Iraqi Communist Party
Victory for the Uprising of the Tunisian People!


The masses of the Tunisian popular uprising culminated yesterday their heroic struggle, that continued throughout the past four weeks against the regime of tyranny and oppression which had strangled them for about a quarter of a century, with a remarkable victory reflected in the shameful escape of the head of the collapsed regime, Zein al-Abidin Ben Ali, from the country, haunted by curses and besieged by condemnations.
In the course of their daily struggle, which was full of determination and perseverance and involved the people in all areas of the country including the capital Tunis, the rising masses made great sacrifices in blood and lives, and offered unforgettable examples on steadfastness, dedication and sacrifice.
The masses also demonstrated deep awareness when they linked, from the outset, their economic demands with political demands, raising the slogan of bread and freedom, and when they rejected the false promises of the vanquished President before he fled, and demanded that he should step down unconditionally.
The Tunisian masses are today demonstrating political maturity, as they reject and resist the ploys of the tyrant’s stooges who are maneuvering to perpetuate his hated regime even though without him, and as they exert efforts to chart Tunisia’s path towards real democracy.
While expressing our firm solidarity with the masses of the courageous Tunisian uprising and their patriotic and democratic forces, and sharing their joy for the victory they achieved yesterday, we recognize like them that this victory is only preliminary, and that the decisive and final victory is contingent on continuing the struggle until the overthrow of the whole of Ben Ali's authoritarian regime, in accordance with the eloquent slogan raised by the Tunisian masses: Insurrection, Insurrection Until the Regime Falls! And until the path ahead is wide-open for the establishment of a democratic regime as demanded by the masses, and for which they have given, and continue to render, great sacrifices.
What has happened in Tunisia is an example for our Arab peoples and all the peoples who are fighting for their freedom, bread and happiness, and for their legitimate aspirations in establishing the political, economic and social system which they desire:  a system of democracy, peace and social justice.
Political Bureau – Central Committee
Iraqi Communist Party
15 January 2011
Posted by Salam at 13:45 No comments: 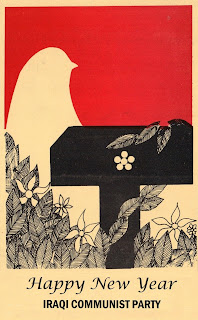 Email ThisBlogThis!Share to TwitterShare to FacebookShare to Pinterest
Posted by Salam at 13:37 No comments:

Iraqi CP - Contribution to the International Conference Organized by AKEL

Iraqi CP - Excerpts from the Communiqué of the Central Committee