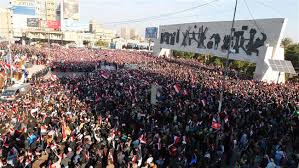 This morning, Saturday 11 February 2017, thousands of our Iraqi people rallied in a peaceful demonstration in Tahrir (Liberation) Square in central Baghdad. Their statements, slogans and chants expressed their determination to continue their march on the path of reform and change and combating corruption. Demonstrators demanded the dissolution of the Electoral Commission and the formation of a new commission that is truly independent, away from the quota system, ensuring that the candidates for its board of trustees are characterized by integrity, credibility, professionalism and impartiality. They also called upon the parliament to legislate a fair and equitable election law that expands participation in decision-making, is non-exclusionary, does not impose the hegemony and domination of certain forces and blocs, and protects the voice of the voters and safeguards their will in choosing their representatives.
Unfortunately, these demands and appeals throughout the past period were not heeded by the ruling forces that resorted to procrastination, under various pretexts. As a result, protests have continued and widened, with diverse demands, including various social strata and spreading to several provinces and cities.
Rather than complying and taking concrete measures to achieve reform, and proceeding ahead toward its objectives as demanded by the masses, and without learning the lessons of previous painful experiences, the demonstrators were confronted without warning with live ammunition, as well as the heavy use of rubber bullets and tear gas, at a time when the demonstrators were loudly chanting "Peaceful ... Peaceful". This excessive and extensive use of violence led to a number of fatalities among the demonstrators in addition to dozens wounded, victims of rubber bullets and tear gas. This reflects the deliberate use of excessive force and cruelty which is totally unjustified.
We condemn, in the strongest words, the use of force and violence in dealing with peaceful demonstrations that are guaranteed by the law and the Constitution and that are making just demands.  We hold the Prime Minister directly responsible for this, being the Commander in Chief of the Armed Forces. He must immediately reveal the identity of those who gave the orders to shoot and use violence in contravention of his directives to the security forces to protect the demonstrators. An investigative committee must be set up that should include in its membership representatives of the protesters or judges acting on their behalf.
The consequences of what has happened today must not be dealt with as it has in the past, because this will deepen the divide between citizens and state agencies and institutions, and will aggravate the atmosphere of mistrust at a time when there is desperate need for building it on the basis of transparency, credibility and support for the just and peaceful demands of the people.
We express full solidarity with the families of the martyrs, wishing the injured a speedy recovery. We are certain and confident that bullets, whether they are live or rubber, will not weaken the will of the people and their yearning for a better life.
Baghdad - 11 February 2017
Posted by Salam at 17:28