On "Communist Martyr's Day" (14th February)
Iraqi CP holds big meeting in Baghdad
The Iraqi Communist Party commemorated Communist Martyr's Day with a big meeting held on 14 February 2009 in the National Theatre in central Baghdad. This annual event was of special significance to Iraqi Communists because it marked the 60th anniversary of the execution of Comrade Yousuf Salman (Fahad), the founder of the party, and two leading comrade

The meeting was attended by members of the Central Committee of the party and hundreds of members and supporters. Several government officials were also present. Comrade Subhi al-Jumaily delivered the speech of the Central Committee. The programme of the event included recital of poetry, songs by "Friendship" group, and
a silent theatrical performance by the "Ninorta" theatre group. The well-known poet Ar 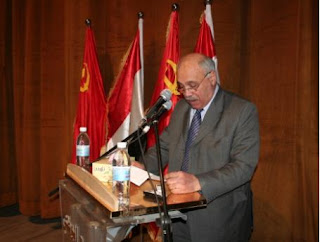 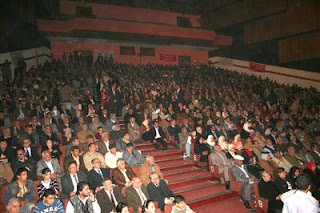 The meeting was also addressed by the secretary of the Union of Writers, the poet and comrade Alfred Samaan, who recalled the final moments of the martyred party leaders, as they bid farewell to their comrades in prison before heroically facing execution. A message was delivered to the gathering on behalf of the families of party martyrs. 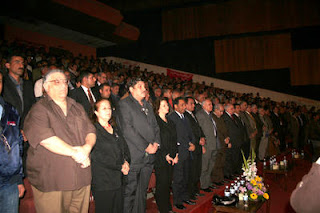 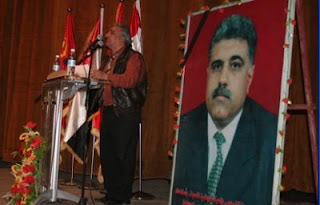 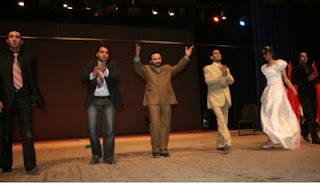 The Preliminary results of the provincial elections, announced by the Electoral Commission on 5th February 2009, have indicated a change in the political landscape, and in the positions of political forces involved in the various lists. While this change in positions reflects, in part, the participation of regions and political and social forces that had boycotted the previous elections, it also shows very clearly that the voters who went to the polls were, in most cases, not motivated by sectarian allegiance but driven by a national motive, as well as a desire not to renew the mandate of those, especially in decision-making positions, who did not live up to their promises and fulfill the hopes of the electorate. The results have also indicated, in general, that the voice of religious and sectarian intolerance and fanaticism has been weakened, in favour of an orientation towards building a civil state and its institutions that would respect the rule of law, the constitution and principles of democracy.

While we commend this feature of the electoral process, which has indicated progress of the democratic process in the country, the expansion of its social and political base, and a growing conviction that the ballot box is the best way for resolving differences and conflict management, we stress that the recent elections were truly an important step along the path towards political stability and security and the restoration of Iraq's full sovereignty and independence.
However, these positive aspects are offset by a number of negative indicators, some of which are of very serious nature and can cast a shadow over the entire image and results of the elections and their repercussions on the political scene.

1) The percentage of participation in the elections was 51% of the electorate, which is lower than expectations and the participation in previous elections. In the capital Baghdad and in Anbar province, it did not exceed 40%. This reflects the reluctance of a significant proportion of the electorate to vote, as a form of protest and an expression of sentiments of frustration. In addition, many people were denied participation because they could not find their names on the electoral register. The primary responsibility for this lies with the Electoral Commission. There are also other factors, such as distant polling stations and the lack of means of transport, and other technical and logistic reasons that have contributed to this lower level of participation.

2) The results in a number of provinces were contrary to expectations and to the information, made available to many lists by their observers and agents, about the counting of votes. This applies to the lists of the Iraqi Communist Party, whether on its own or in alliance with other forces and personalities. Our party has submitted its objections to the results that have been announced in some provinces, and has demanded that all the objections be dealt with in utmost seriousness, professionalism and transparency, to uphold what is right and remove doubts about the fairness of the elections and the performance of the Electoral Commission.

3) A careful analysis of the preliminary election results confirms what our party had previously warned about, in connection with the unfair system of distributing the remaining seats, as stipulated by the Law for Provincial Councils Elections. In some provinces, the combined votes of the lists that won did not exceed 35% of the total votes of the electorate, which means that the remaining votes (65%), that correspond to the share of lists that did not win, would unjustly go to the winners! This constitutes, in our view, a threat to the democratic content of the electoral process, and represents a kind of usurping the voter’s voice and using it against his/her will. This electoral system inflicts gross injustice on other lists and their voters, and also distorts the Council’ representation of the electorate in the province.

4) “Political money” has been lavishly spent during the election campaign by some lists, including what was spent for the purpose of bribing voters. This has had a clear impact on the results, and represents a serious threat to democracy and the freedom of voters to cast ballots without illegitimate pressure and influence. This is a loophole in the electoral system and the organization of democratic practice that requires urgent action to develop controls governing expenditure in the election campaign, as part of the two laws that need to be enacted; one for elections and another for parties.

5) In a clear violation of the law, the resources of the state and its media institutions were widely employed by some of the lists and figures, for the purposes of election propaganda and to influence the choices of voters. Other violations and abuses took place, including the use of places of worship in some areas.

The Iraqi Communist Party and its allies in various lists, according to the preliminary results announced by the Electoral Commission, did not get what is commensurate with the status, activity and influence of Communists, and their supporters and allies, which are recognized by people in the provinces and their political and social forces. The Party has therefore expressed its reservation about some of these results and has presented its objections to the Electoral Commission.

Our party has actively participated in the provincial elections, irrespective of the results it would achieve, exercising its right to get to the masses of people and propagate its policy and program, and seeking to improve its positions and achieve a bigger proportion of votes. Despite being aware of the objective difficulties that we face, which are big, the party organizations and its supporters exerted an exceptional effort, full of enthusiasm, vitality and creativity. They have managed in the course of their campaign to extend links with the broad masses of people and workers, and have accumulated political experience and enhanced credibility among the people, that will both be important for subsequent elections and for the future of the democratic process in general. Baghdad