As U.S. prepares to leave, what’s happening in Iraq?

As the U.S. moves to wind down its disastrous six-year occupation of Iraq, what is the shape of the country it is preparing to leave?

Although violence has sharply decreased, suicide bombings and assassinations continue. On March 8, for example, a suicide bomber in Baghdad killed more than 30 people in a crowd of police recruits.

Yet U.S. and Iraqi officials say violence is the lowest since summer 2003, before major sectarian bloodshed engulfed the country.

Illustrating this trend, a million Shiites gathered peacefully for a major religious celebration March 6 at the “Golden Dome” mosque in Samarra, a Sunni-majority city. In February 2006, armed groups blew up the mosque, touching off vicious sectarian violence that killed thousands of Iraqis over the next two years.

This time, Sunni residents welcomed the Shiite pilgrims, the Los Angeles Times reported, calling it “the latest sign of reconciliation among Iraqis eager to put the country's civil war behind them.

At the same time, conditions of daily life continue to be abysmal.

A recent United Nations report shows many areas are afflicted by chronic disease and child malnutrition, lack of regular electricity and safe water, high unemployment and major illiteracy among women. This includes Baghdad, home to one-quarter of Iraq’s population.

Widespread corruption has contributed to the lack of progress in these areas.

Discontent on these issues was a major force in provincial elections Jan. 31. Religious parties that controlled various provincial councils lost out, blamed for corruption and failure to improve living conditions.

The results indicated a rejection of religious sectarianism, a focus on improving concrete conditions, and a developing national consciousness, said Salam Ali, spokesperson for the Iraqi Communist Party.

Prime Minister Nouri al-Maliki’s coalition, centered on the Shiite Dawa (Islamic Call) party, came out on top by steering clear of religion. Supporters of cleric Moqtada al Sadr also avoided religion in their campaigning. They came in second in Baghdad and some other places, but ran a distant second in Baghdad’s Sadr City slums, formerly their stronghold.

People voted for Maliki because of his success in curbing militias responsible for much of the violence of recent years — “it was like a popular vote against the militias,” Ali commented.

“It’s quite clear the mood of the people has shifted very significantly away from religious sectarianism and bigotry, toward a more national mood,” Ali said. While political Islam will continue to play a big role in Iraq for some time, it has failed to present a coherent vision, he noted. Islamic parties like Maliki’s “don’t put forward the idea of an Islamic state, because they cannot get support for this.”

In fact the Maliki platform in the January elections borrowed heavily from the language of Iraq’s Communists and other democratic secular groups, including the call for a non-sectarian state based on civil law, Ali said, adding, “That, by itself, is an admission that his religious version will not gain support.”

While Maliki got his biggest support in Baghdad and Basra, in other areas, including heavily Sunni provinces, his vote was much lower.

In those areas, the formerly dominant Sunni Islamic Party lost out to a mix of tribal factions, former Baathists, Arab nationalists and local figures.

Diehard Baathists who boycotted previous elections and organized much of the armed violence in Iraq have seen their support dwindling. “Many of them have come to the conclusion that their methods have left them isolated and they need to get into the political process before it’s too late,” Ali said.

“People close to such groups are concerned about their political future when the Americans leave.” Now, they are inviting Hussein-era officers who fled the country to return and participate, he said. There is talk, too, about reconstituting the Baath Party under a new format.

The participation of these forces in the political process, Middle East scholar Juan Cole observes in his blog, is seen as having the potential to “advance Iraqi reconciliation efforts following years of bloody sectarian fighting.”

Ali said national reconciliation will take time and will depend heavily on progress on economic conditions. He said public opinion was largely favorable to Obama’s withdrawal plan and does not believe the pullout moves will spur any significant renewal of violence in Iraq. “Terrorist groups could launch some operations, but their impact is likely to be limited” as these tactics lose support, he said.

The provincial elections were marred by the bandying about of huge sums of money to essentially buy votes. The results were also distorted by a process that favored the largest vote-getters at the expense of smaller slates: it set a very high threshold to win a seat, and then took the votes that fell below the threshold and distributed them to the bigger slates. In some provinces, smaller slates received 40 percent or more of the vote.

The ICP had opposed this procedure as “unfair” before it was adopted. Now it is calling for a revised election law that ensures greater representation by reallocating the votes “bottom up” — distributing the below-threshold votes to the top vote-getters among the smaller slates.

The skewed process is one reason why the Communist Party lost provincial council seats this time, although it gained some new ones. One place where it picked up a seat was Tikrit, Saddam Hussein’s hometown.

The ICP drew 100,000 votes in the 14 provinces where elections were held. This was lower than its total four years ago, Ali said, One reason, he said, was that sectarian violence had made it impossible for the party to work openly in some areas until recently. In Sadr City, the Communists won 5,000 votes this time, but had only campaigned there for two months because of earlier violence.

The Jan. 31 election process involved a combination of slates and individual candidacies. This type of campaigning was a new experience for Iraqi Communists, after decades of repression under the former regime.

Ali said thousands of volunteers participated in the ICP’s campaign, especially young people, distributing leaflets and organizing motorcades. “This was the first time for years that we campaigned in this way,” he said.

(The Los Angeles Times ran a colorful account of the party’s campaign in Baghdad: http://www.latimes.com/news/nationworld/iraq/complete/la-fg-iraq-communists28-2009jan28,0,1690178.story)

The campaign was a good learning experience, “a good base on which we can build,” Ali said. The party recognized a need to do better in some areas that will be familiar to U.S. political activists — media outreach and get-out-the-vote efforts. “People think all you have to do is hand out a leaflet,” he commented.

As in the U.S., it was often hard to convince voters it was worthwhile to go out and vote in local elections. Then, when people got to the polls, in many cases their names were not on the lists.

Turnout overall was lower than previously. Ali said this was an expression of frustration by many Iraqis over the poor performance of provincial governments, as well as continuing security problems.

Now the winners will be expected to live up to their promises to improve basic conditions. If they fail to do so, they will likely pay a price in municipal elections coming in July, and in December’s national elections.
Posted by Salam at 06:47 No comments:

Iraqi Communist Party Calls for National Campaign
to Amend the Provincial Elections Law
The Iraqi Communist Party has called for a review of the election law for provincial councils, and for launching a national campaign "to make a concerted effort through joint action" in order to prevent a repetition of "injustice" in the forthcoming district councils election, or in any subsequent elections. 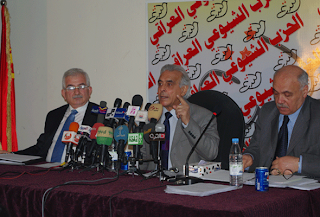 This came at a press conference held on 28 February 2009 at the headquarters of the party’s Central Committee in Baghdad. Special attention was given to exposing the flagrant abuse of the essence of democracy because of the election law for provincial elections.

A statement issued by the Political Bureau of the Central Committee on this subject was first read out. Questions from journalists and media representatives then followed. In response to a question from "Al-Mada" newspaper, about whether Article 5 of the Law for Provincial Elections had been ratified in parliament through a political deal, Comrade Mufid Jazairy, member of the Political Bureau, explained that what is important is that the law must be reviewed, regardless of whether or not it had been passed through a deal. "The Article was passed in any case. It should now be reconsidered in view of the harm inflicted upon the voters," he said. Jazairy added: "We call for replacing this Article with another to ensure that the remaining votes do not go to those who should not get them, regardless of the electoral quotient."

Comrade Subhi Jumaili, member of the Central Committee, said that the legislative aspect of the issue, with respect to the election law, is the responsibility of the Parliament. But, he added, the Independent Electoral Commission should have raised its voice with regard to Article 5 because it has experience in this area. "The Commission bears responsibility for part of the problem because it did not explain the injustice that this Article contained."

A reporter for Radio Sawa enquired whether the problem lies in the Article itself or in the system used by the Electoral Commission in its work. Jazairy said that Iraqi CP's statement pointed out the failure of the Commission in some aspects of the electoral process, "but when we talk about the election law, it is the responsibility of the Parliament. I have here the text which we proposed (in parliament) on 15 July 2008. The proposed Article would have given the vacant seats (after considering the electoral quotient) to the open lists which have the bigger number of votes, according to their sequence, whereas the text of the current law gives these votes to the bigger lists."

Comrade Hassan Akif, member of the Political Bureau, stressed the need to mobilize all the people who were affected, or would be affected, by the unjust election law. This includes political parties as well as the millions of people (more than 2 million people in the recent election) whose votes have gone in vain. "This action has to start from Parliament and pass through the political parties, until the unjust Article is amended."

Kazem Gilan, a journalist from "Al-Sabah" newspaper, raised a question about the fact that the preliminary results revealed that 250 candidates in the elections had presented forged academic certificates, and asked whether the Electoral Commission should have been alerted to this. Comrade Akif explained that the Integrity Commission had announced the existence of forged certificates, and that a bigger number are now being checked. "As pointed out by our party statement, in this regard, the Integrity Commission was more serious than the Electoral Commission. We believe that that the principal punishment must be meted out to the political entities that had presented candidates with forged certificates."
Posted by Salam at 13:14 No comments: