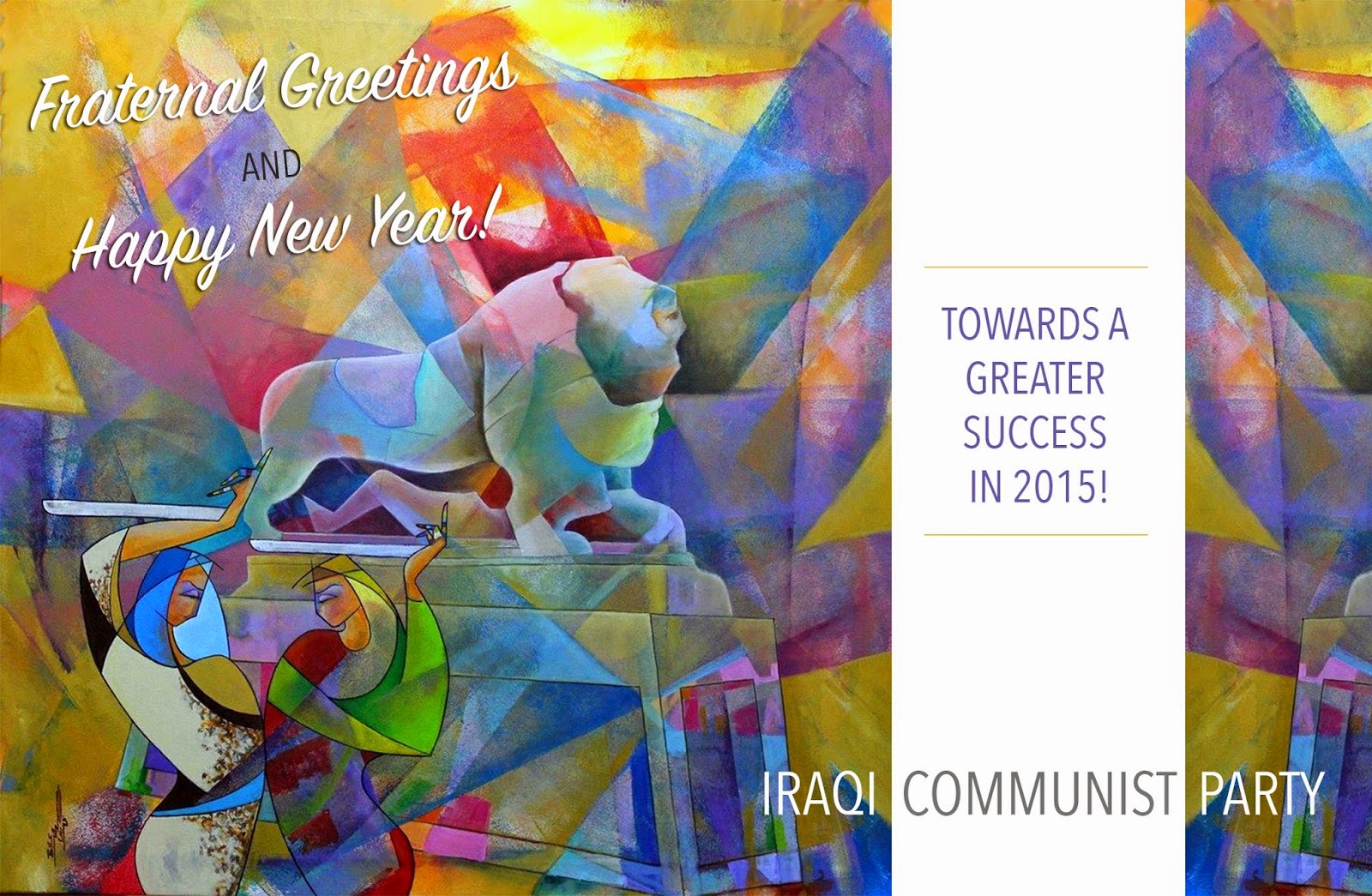 
Workers’ protests will continue until their demands are achieved

22 December 2014
The Economic Committee in the Iraqi parliament has considered the government’s decision to pay a one month salary to the workers and employees of the self-financing companies of the Ministry of Industry as an ineffective measure, noting that the workers do not bear the government's mistakes. The Committee called for an end to the problem of self-financing and for converting these companies to central funding.
Meanwhile, the General Federation of Iraq Trade Unions (GFITU) stated that withholding workers' salaries is illegal, stressing that labor activists will continue their protests and pressure on the government to address the salaries of this broad sector, to pay all the workers’ entitlements and to focus on the role of the national industry. 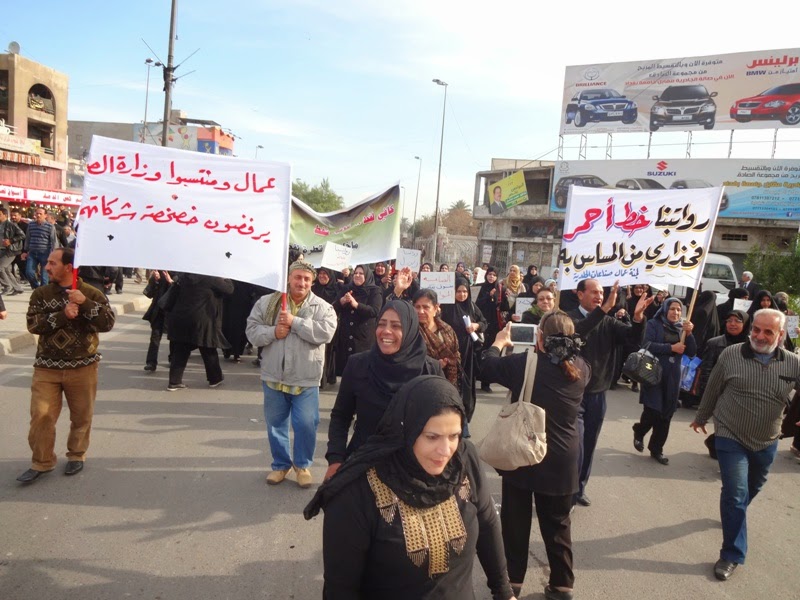 In an interview with "Tareeq Al-Shaab" yesterday, Nora Al-Bjarai, member of the parliament’s Economic Committee, said, "the employees have nothing to do with the mistakes of the government and they should get their salaries without cuts". She added that “there is a clause in the budget that provides for the Ministry of Finance to pay the loans of the Ministry of Industry loans .. to end this problem to be get the salaries paid by by the central government."
Tawfiq al-Kaabi, a member of the parliament’s Services and Reconstruction Committee, said that meetings have taken place with the Minister of Industry with regard to the workers of self-financing companies, as well as with members of the Services Committee and other committees “in order to spare any citizen the non-payment of salaries."
Al-Kaabi said in an interview with "Tareeq Al-Shaab" yesterday that "there is a big response by the relevant authorities to resolve the problem of these workers and activate of their projects@. He noted that "the Services and Reconstruction Commission will press the government to activate these factories, such as the lone manufacturing spiral pipes and other plants. The Iraqi economy today is one-sided and needs the support of other sectors such as industry through the operation of these plants."
He added that "many of these plants are ready and do not need a lot of effort  to get them running.. they only need a little support from the government". He pointed out that "investment in these plants will provide the economy and the budget additional support in the coming years.
The vice-president of the General Federation of Iraq Trade Unions (GFITU), Hadi Ali, said that "paying a one month salary is not enough. The government should have taken into account the fact that these workers have families, and they need the monthly salary without delay because it is their right". He added that "paying workers’ salaries in installments is not right and non-payment is a violation of the law."
Hadi said in an interview with "Tareeq Al-Shaab" yesterday, that "the General Federation of Iraq Unions (GFITU), along with activists, will continue their campaign and pressure on the government until the issue of teh salaries of this broad sector is tackled". He noted that "there is pressure and lobbying by the unions and activists not only in Baghdad but also in the provinces, that has extended to the parliament and become a popular demand for the payment of all workers' entitlements, as well as focusing on the role of the national industry”.
He said that activating this labor force will help to support the state budget. He added: “We don’t rely on the promises given by the government. We want them implemented on the ground”. 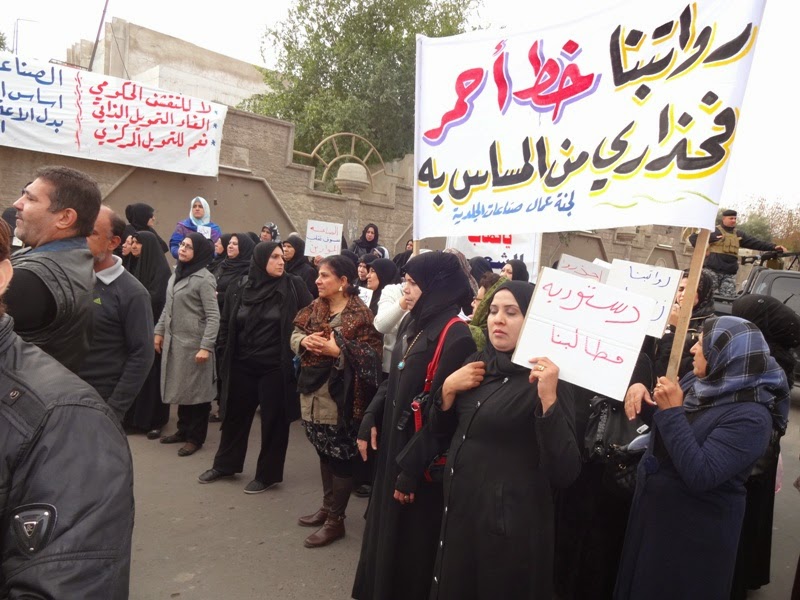 
The Central Committee of the Iraqi Communist Party
holds its regular meeting
The Central Committee of the Iraqi Communist Party held its regular meeting on 14 November 2014. The meeting was preceded by extensive preparations that included party organizations and specialized committees, a meeting of the party’s Central Advisory Board, an ideological seminar on political sectarianism, and a meeting of the Central Committee of the Kurdistan Communist Party.
The meeting began with a minute of silence in honor of the martyrs of the Iraqi people and victims of terrorism and violence, and the party members and supporters who passed away in recent months. The participants also commemorated the 10th anniversary of the martyrdom of the Iraqi communist leader Comrade Wadhah Abdul Amir (Sa’doun), and paid tribute to his struggle and fidelity to the Party, the people and the homeland.
The participants considered a number of reports on the performance of the party and its leadership, and the performance of specialized committees and party organizations all over the country and abroad.
The meeting gave exceptional attention to improving leadership work on all levels, expanding the party's interaction with the masses and its impact in this field, striving to build effective party organizations that are fully aware of the daily concerns of people and defend their interests, rights and aspirations. Decisions and recommendations were adopted in these matters.
The meeting discussed the political developments in the country since the previous meeting of the Central Committee in May 2014, and pointed out that this period was characterised by big events that left their mark on the political scene. Among these developments was the invasion by the terrorist Islamic State organisation (Isis) of the city of Mosul, followed by its criminal gangs extending to other provinces and cities, as well as the process of the formation of the new government in the aftermath of parliamentary elections. The latter resulted in a parliament whose composition did not reflect the demand for change raised by the masses and the civil and democratic forces. The new government has thus been the fruit of those election results and the partial change which they reflected. This has offered a glimmer of hope which needs, if it is to expand and open up broader prospects, to be nurtured, requiring a host of prerequisites and the adoption of a new type of thinking.
The meeting concluded that what happened on 10th June 2014 has constituted an important juncture in the overall political situation in the country. It had also military-security, social-political, and moral-psychological repercussions on citizens and the whole society.
The meeting condemned the crimes perpetrated by the terrorist organization Isis against all the constituents of our people. It also praised the steadfastness of the people in the areas that have been plagued by this ugly cancer, and the growing spirit of resistance amongst their ranks.
The meeting warned against underestimating the danger posed by Isis and its schemes, and the black malice it harbors for Iraq and all Iraqis. It also praised the sacrifices of the military and security forces, the Peshmerga, the popular mobilization force and the tribes, what they have done to stop the expansion of Isis and embark on liberating towns and villages, and the victories they have achieved recently.
In this regard, the meeting called for providing all the requirements and conditions for the final victory in the national battle against Isis and for activating factors to drain its resources. In this context, it stressed the need to hold an all-encompassing National Conference, reform the political process and achieve genuine national reconciliation.
The Central Committee meeting emphasized, on the other hand, the need to devote all care and provide all the support and assistance to the hundreds of thousands of displaced people and to alleviate their suffering.
The meeting greeted the struggles waged by various social groups and sectors. In this respect, it considered the labor protest movement that developed in recent days, praising it and expressing support for the demands of the workers. It stressed the need for a speedy positive response by the government to these demands, and a serious re-consideration of the State's economic policy and strategy, to ensure building an active, dynamic and multi-resourced national economy and expanding its productive base. The meeting also stressed that the citizens, especially the hard-working and with low-incomes, must be spared the consequences of the poor management of the country’s financial resources since 2003 and the recent decline in global oil prices.
On concluding its meeting, the Central Committee unanimously renewed confidence in its Secretary, Comrade Hamid Majid Mousa, and elected Comrade Raid Fahmi as deputy Secretary. It also elected the Political Bureau of the Central Committee.
An extensive political report about the deliberations of the meeting will be issued soon.

Iraqi CP: Solidarity with the Iraqi people and their democratic forces - Sept. 2014