A delegation representing the leadership of the Iraqi Communist Party visited the President of the Republic, Dr. Fuad Masum, on Sunday 17th August 2014 and extended the congratulations of the party and its leader Comrade Hamid Majid Moussa on the occasion of his election to the post of President. 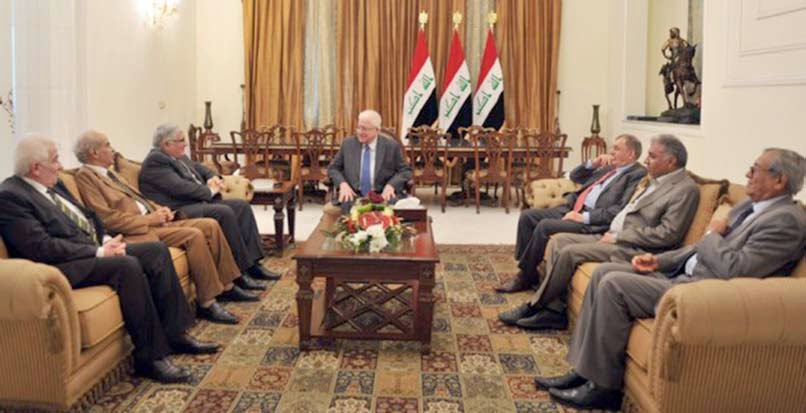 The delegation conveyed to the President the wide positive sentiments toward his election to the presidency from the democratic civil forces and their supporters, as well as broad sections of the people. His rich political experience, knowledge and wisdom should qualify him to be an inclusive symbol who would play, by virtue of his position as President of the Republic, a pivotal role in improving the political climate and stimulating and enhancing dialogue and consultation to confront and address the big challenges facing our country, in the forefront of which is confronting terrorism and defeating it.


The delegation emphasized the party’s support for the sincere efforts exerted by the President to form a national unity government with broad representation, that would be able to unite the country as it wages a war of crucial consequences for its existence and for the people, including all the ethnic, religious, confessional and social spectrum. Support was also expressed for his effort to achieve the national consensus necessary for a proper construction of the state and its institutions, and to put the country on the path toward peace, security, stability, progress and prosperity.
The President of the Republic Dr. Fuad Masum thanked the delegation for the sentiments and support it expressed, and praised the role of the Iraqi Communist Party and its struggle. He welcomed all the opinions and proposals that the party has put forward, and stressed his personal conviction of the need to adopt dialogue and consultation as means to reach common visions and positions in the face of problems and challenges, and to ensure solutions to the numerous crises.
In this context, the President welcomed the proposal put forward by the Communist Party for holding a National Conference, as a contribution to ideas and initiatives that help to launch and organise the process and mechanisms of dialogue and consultation among the various political forces and blocs, and to overcome the state of division and estrangement that prevailed during previous periods.
At the end of the meeting, the delegation expressed its best wishes to the President for success in his duties. On his part, the President thanked the party delegation and asked it to convey his greetings to Comrade Hamid Majid Moussa.
The delegation included members of the party’s Political Bureau, comrades Raed Fahmi, Mohammed Jassim al-Labban, Hassan Akif and Jassim al-Hilfi.
Posted by Salam at 11:28 No comments:

Iraqi CP - On the nomination of the new Prime Minister‏


Editorial of “Tareeq Al-Shaab” (People’s Path), the newspaper issued by the Iraqi Communist Party – 14 August 2014
On the occasion of nominating Haider al-Abadi to the post of Prime Minister
We call for completing the peaceful transfer of power
and the formation of a broad national unity government

After an intense and difficult struggle among political parties and leaders, especially among the parties of the National Alliance, in addition to various external pressures and interference, the Iraqi President Fuad Masoum nominated Haider al-Abadi, the candidate of the National Alliance, to form the new government. This nomination comes after the election of the Speaker of Parliament and the President, thus signifying another important step on the path to complete the process of peaceful transition of power. This is a welcomed success for the political process which remains stumbling and requires rectification and reform.
The nomination of the new prime minister has been widely welcomed by political circles inside Iraq and on the Arab, regional and international levels. These are positive signals and reactions that constitute a significant political and moral asset for the prime minister-designate as he embarks on the formation of a government with a broad political base, as stated when he was nominated by the President.
It is certain that the new government will be facing unprecedented challenges, especially on the political and security levels as Iraq is confronting a terrorist onslaught of utmost viciousness and brutality that is targeting its existence as an entity and homeland, a people and society, and a culture and civilization. The new government will also find itself facing a heavy legacy of outstanding and deferred problems and issues that need to be urgently tackled and resolved.
In order to confront the forces of terrorism and anti-people forces, and to defeat them and their evil plans, it is necessary to adopt a new approach and style of thinking in dealing with the political forces and with the problems and issues; based on openness, dialogue, consultation, genuine participation and instilling confidence. It requires taking into account national consensus in line with the Constitution and the higher interests of the country and people, and exerting serious effort to resolve the knotty issues and speed up the implementation of solutions that are reached.
The relationship between the federal government and the Kurdistan region is of distinct importance that emphasizes the need to restore the language of dialogue and consultation, and referring to the Constitution and national common ground to tackle the existing problems and explore ways to find solutions for the benefit of everyone. There is also an urgent need to raise the level of coordination and cooperation in the military field in the face of the gangs of Isis and terrorism.
We, along with the broadest masses of our people, look forward to the forthcoming phase opening up a new page in the relations between the various political forces and working to improve the overall political climate. Joint action is needed to restore and strengthen national unity, to reject the discourse and practices that fuel intolerance and religious, confessional and ethnic extremism, and all forms of discrimination between our people, and to uphold the principle of citizenship in word and deed.
The process of forming the new government cannot overlook the lessons of the past experience which have shown unequivocally the enormous damage inflicted on the performance of the state and its institutions as a result of reliance on the logic and basis of sectarian and ethnic power-sharing. Therefore, the standards of integrity, efficiency, professionalism and dedication to the causes of the people must not be relinquished again in the process of selecting ministers and allocating of responsibilities. This applies to all state-building which needs to be reviewed and reformed, away from the prevailing approach and practice of sectarian and ethnic power-sharing.
The intensification of the war against gangs of Isis and other terrorist organisations, and the efforts to stop the brutal crimes which have claimed the lives of thousands of our people and the indigenous ethnic, religious and confessional components, also requires speeding up the formation of a broad and all-encompassing national unity government that undertakes to mobilize all the national capacities and potential against terrorism, and proceeds to dealing with the crises and problems facing the country. In this context, the Iraqi Communist Party welcomes every step that strives to achieve cooperation between the political forces that adhere to the Constitution and the political process and brings them together in order to develop joint patriotic visions and positions that find their way into the government's program.
To stress this goal and to achieve it, we renew our call for the convening of a National Conference of the forces that founded and participated in the political process, in parallel with the efforts to form the new government. This conference should review the political process, ridding it of the mistakes and defects revealed by the past experience and returning it to the proper path that leads to building a prosperous federal democratic Iraq.
We hope that those who are sceptical and opposed to the constitutionality of the process of nominating Mr Haider al-Abadi to form the government avoid anything that would threaten stability and disrupt the process of peaceful transition of power, and spare the country further crises and divisions while it is locked in a fateful struggle against the evil forces of terrorism.

Iraqi CP - In solidarity with our Yazidi people


Statement of the Political Bureau of the Iraqi Communist Party
In solidarity with our Yazidi people
Concerted national efforts are needed to recapture the areas seized by criminal Isis gangs
We have been following with great anger and condemnation the brutal practices and horrific crimes committed by the criminal gangs of “Isis” against our Yazidi people that aim at eliminating this indigenous cultural and religious component of Iraq. These terroist and rogue gangs have killed the children of Yazidi people, captured and enslaved their women, destroyed their temples and desecrated their religious symbols. These heinous crimes are classified under international law as crimes against humanity.
These crimes represent another episode of the series of barbaric attacks waged by the terrorist gangs of “Isis” against the Iraqi homeland and people. It is part of the suspicious scheme that has extended over the whole of Iraqi territory, affecting all citizens, including Arabs, Kurds, Turcomans and Shabak; Muslims, Christians and Yazidis; Sunnis and Shiites.
While reaffirming the Iraqi Communist Party’s full solidarity with our Yazidi people in their cruel plight and sharing their pain as a result of this ordeal, we express our readiness to provide all possible help and contribute to the joint efforts to alleviate their suffering. We call on the Iraqi state and all its institutions to speed up the delivery of relief aid to the hundreds of thousands of displaced people who sought refuge in the mountains and caves under deteriorating conditions, and to provide the human, material and technical resources needed to accomplish these urgent tasks. In this regard, we call upon international organizations and the international community to deal with what is happening in Iraq as crimes against humanity.
In the difficult circumstances caused by this ordeal, our party calls upon all the political and social forces, parties, blocs and organizations, and in particular the forces that are in power at the level of the federal government, the Kurdistan Regional Government and the local authorities in the provinces, to unify their stance and efforts in the face of terrorism and the gangs of “Isis” and their barbaric acts.
The recapturing of the areas seized by “Isis” and eliminating it are urgent and immediate objectives that require mobilizing all national efforts. This necessitates accelerating the efforts to overcome the existing differences between the Federal Government and the Kurdistan Regional Government, and to achieve the broadest possible cooperation and coordination at both the political and military levels to ward off the dangers threatening Iraq. This also requires resolving speedily the naming of the Prime Minister nominee and embarking on forming an all-encompassing national unity government that is able to address the daunting tasks facing our country at this historic juncture.
BAGHDAD – 6 August 2014
Posted by Salam at 06:32 No comments: