Statement of the Central Committee of the Iraqi Communist Party:
Evacuation Day is Triumph of People’s Will along the Path towards Complete National Independence and Sovereignty

Iraqi Communists celebrated the Evacuation Day on 31st December 2011, marking the departure of American occupation forces from Iraq. A big rally was held in the party headquarters, in Andulus Square in central Baghdad.
The party leader, Comrade Hameed Majid Mousa, addressed the rally, congratulating all Iraqis on this national day, and also extended best wishes for the New Year.
The statement issued by the Central Committee of the party on Evacuation Day was read out by CC member, comrade Ayoub abdul-Wahab.
The program of the event included poetry recital by the well-known poet Nadhem al-Samawi, and also the popular poets Mohammed al-Ezerjawi and Basim al-Dulaimi.
Hundreds of people, who could not get into the main hall, gathered outside the party headquarters, around the statue of the party leader Salam Adel who had been martyred in the fascist coup in February 1963. They were greeted by comrade Mousa as they celebrated the occasion by chanting slogans and waving Iraqi flags.
Posted by Salam at 09:15 No comments: 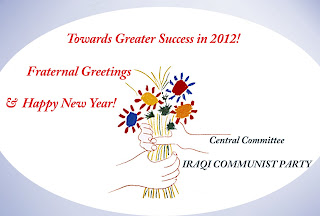