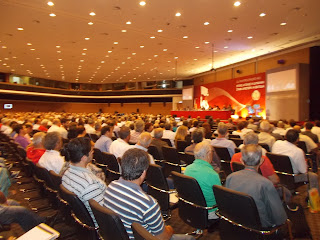 Dear Comrades
Let me first convey the wholehearted greetings of Iraqi Communists and their best wishes for a successful 22nd Congress of the fraternal party of AKEL. We are confident that this Congress will contribute to consolidating the outstanding role of AKEL in upholding the fundamental rights of the working people of Cyprus and continuing the just national struggle of the Cypriot people for the reunification of their homeland.
We also express our high appreciation to our comrades in AKEL for organizing this International Conference on the issue of “The threats of fascism and reactionary forces in the era of imperialism and wars”. This topic has acquired exceptional importance for our movement and all progressive forces, with the rise of fascist and ultra-reactionary forces, such as the terrorist organization known as “Isis” (or Daesh), with the connivance and support, directly and indirectly, of imperialism and its reactionary allies in order to achieve their strategic objectives and justify more military interventions and other forms of interference. This is demonstrated most blatantly in the current situation in our region, the Middle East, and in our country Iraq.
Dear Comrades,

The peoples of the world celebrated in May this year the 70th anniversary of the victory over Nazi-fascism, the most violent form of class domination generated by capitalism and the direct cause of the war and of the death of tens of millions of people. On this occasion, we recall the heroism of the people and army of the Soviet Union, and of millions of Communists and anti-fascist fighters from all over the world who dedicated their lives to achieve that victory. It is also of great importance for Communists to recall the lessons of history and the battle against fascism, and not to forget the tragedy of World War II, as well as subsequent wars of aggression instigated by imperialism and reactionary forces. This is essential for intensifying the struggle against warmongers and the new forms of fascism; for world peace, freedom, democracy and social progress.
Dear Comrades,
In this brief contribution, taking into account the time constraint, we will focus on our Iraqi people’s long and continuing struggle against war, for peace and democracy.
The 20th of March 2015 was the 12th anniversary of the war and invasion of Iraq by the US and its allies. On the 9th April 2003, three weeks later, Saddam’s regime, the most vicious fascist dictatorship in Iraq’s modern history collapsed.
12 years on, Iraq is still confronting and suffering the heavy legacy of three decades of dictatorship and three wars: the Iraq-Iran war (for 8 years: 1980-1988); the First Gulf War (following Saddam’s invasion of Kuwait in August 1990); and finally the Second Gulf War (2003). But the Iraqi people also suffered horrific “internal wars”, as well as 13 years of economic sanctions; the harshest sanctions regime ever imposed by the UN. Saddam’s regime unleashed a war of genocide against the Kurdish people, culminating with the barbaric use of chemical weapons. The Iraq-Iran war, started by Saddam in collusion with US imperialism led to massive death and destruction in both neighboring countries.
But it is important to point out here that before that war started, Saddam’s regime had launched a barbaric onslaught on the Communist Party and democratic forces, that began with executing 31 comrades in May 1978 under flimsy charges of organizing within the armed forces. The anti-communist campaign, with physical liquidation and mass executions, continued unabated until the shameful collapse of the dictatorship in April 2003.
Dear Comrades,
Almost one year ago, on 10th June 2014, the terrorist organization known as “Isis” (or Daesh), and its allies including remnants and supporters of Saddam’s fascist dictatorship, launched an attack on Mosul, seizing control of Iraq’s second largest city and unleashing a wave of barbaric crimes against tens of thousands of innocent civilians. In the days and weeks that followed, the whole world witnessed crimes against humanity being committed against innocent Iraqi civilians. Religious and ethnic minorities were targeted, especially Christians, Yezidis, Turkmen and Shabak, with the aim of uprooting indigenous communities that have peacefully lived and coexisted in Iraq for over two thousand years. The terrorist onslaught that followed, and is continuing since then, has created a humanitarian catastrophe. As a result, 3 million people have now been displaced by violence in Iraq.
These grave developments cannot be isolated from what Iraq has lived through in recent years. The country has been in a deep and total crisis caused by the legacy of long years of tyranny and dictatorship, the consequences of the U.S. occupation and the interference of regional powers. Its roots lie in the sectarian-ethnic power-sharing system that has existed since 2003. The crisis has also exposed the agenda of the ruling political forces and their fighting to maintain positions in political power and privileges, while the people’s suffering and anger intensify as a result of rampant unemployment, corruption and poor public services, health and education, and the deepening of the rentier nature of the Iraqi economy at the expense of productive activities, in addition to the deteriorating security situation.
The radical remedy for the problems of the country and its intractable crisis lies in getting rid of the sectarian - ethnic power-sharing system, commitment to the values ​​of true democracy, with its political and social dimensions and institutions, and building a democratic civil state.
Iraqi Communists and their party organizations all over Iraq have been actively involved in the national effort to fight and defeat the ultra-reactionary terrorists and provide humanitarian support to the displaced communities. They are playing, along with other democratic forces, a vital role in combating sectarianism, chauvinism and nationalist bigotry, preserving national unity and upholding human and democratic rights.
Our party is also firmly opposed to the schemes that are aimed at dividing Iraq along sectarian lines. It is up to the Iraqi people to decide their own fate, democratically, with their own independent will, without interference by any outside powers, and rejecting attempts to impose designs that serve imperialist agenda for hegemony and exploitation.
International Solidarity
In this just struggle, international solidarity is indispensible. All forms of international support extended to Iraq in its battle against terrorism should be based on international legitimacy and within the framework of the UN. In this respect, it is of utmost importance to continue humanitarian help to the hundreds of thousands of displaced people. Effective measures are needed to cut off the funding from reactionary regional and Arab forces, as well as blocking all external human resources and material support, that is flowing to the terrorist organization “Isis” (Daesh) and its allies.
The barbaric crimes committed against the Iraqi people and their perpetrators must be unequivocally and universally condemned.
We call on fraternal parties, and all the peace-loving and progressive forces in the world, to express support and solidarity with the Iraqi people and democratic forces in their fight against the ultra-reactionary terrorist forces and political sectarianism, and for a democratic civil state in a unified democratic and federal Iraq.